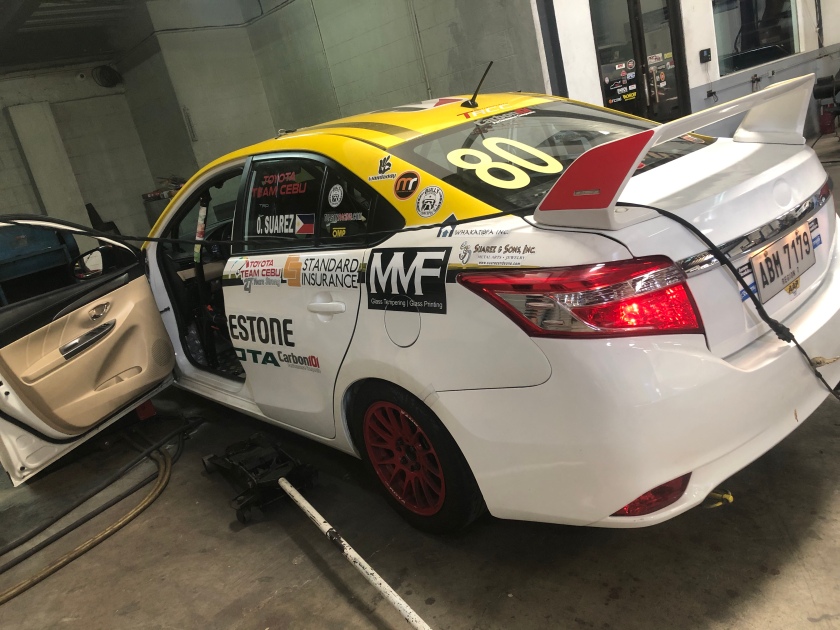 There are over 1,000,000 article on the Internet about header design and which makes the most power, so here’s ours to add to fray.

Only we won’t get into the whole “X design vs Y design” debate, there’s enough of that already to leave you severely confused for days.

What we will focus on is for a specific engine and vehicle, namely a 2014 Toyota Vios with the 1.5L Vvti engine, which we have a lot of background and data on since we were involved with the Philippine Vios Cup from the beginning such that we have Dyno data on all the cars.

First off there is quite a wide spread of power levels for a field of over 10 cars, with stock power ranging from 88-92whp on our Dynapack Dyno, which is to be expected. And as the cars get raced more and more, we see some cars reach as high as 95whp. Mind you these cars are race prepped from the factory and spent their break in period of 1000km being revved the snot out of, which explains the slightly elevated power levels as the kilometers pile on.

Being 2019, the first batch of Vios Cup race cars are now being turned to compete in the GT100 class, and as the name implies, a class of cars that do no exceed over 100hp as measured by a Dyno Dynamics dyno at the race track.

Ask anyone in the tuning world, Australian dynos such as Mainline and Dyno Dynamics really read lower than Dynojet or Dynapack, anywhere from 18-25% lower. Now this doesn’t mean one Dyno is less accurate than the other, thats just the way it is. 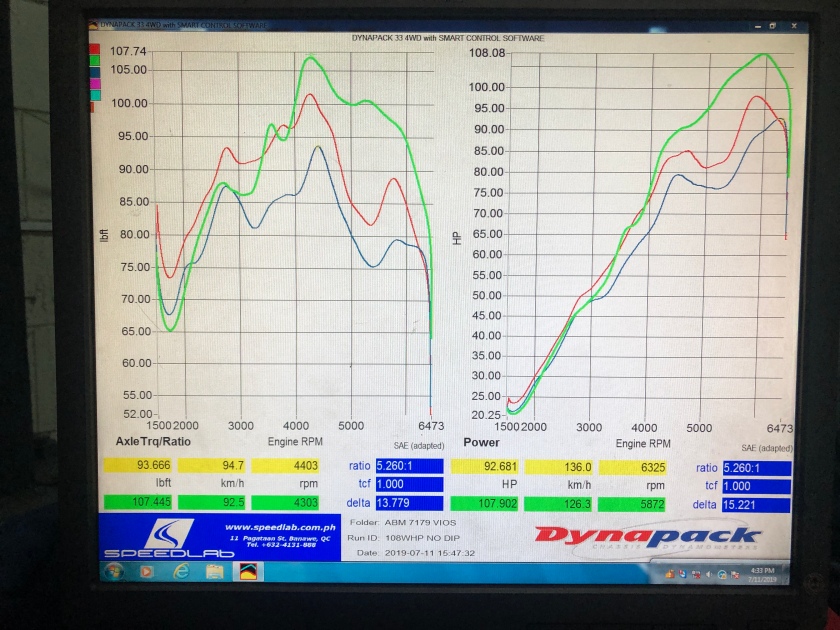 Its a 16whp increase from their previous setup and I was eager to go the races and particularly what it will do on the Dyno Dynamics. And off we went and this car spun the rollers at 86whp. Well that does translate to around 20% less. And while I was there, I did see a B20 equipped Civic being detuned to qualify under the 100whp limit, and this car did a final Dyno of 97whp.

After a day of racing with feedback from the drivers that it felt a lot stronger coming out of the corners, its my job to find another 10hp for them to be competitive.

And so back to shop to see what can be improved. And we came up with two things: Bigger intake for more flow and a real deal long tube race header design for unrestricted exhaust flow.

And here’s the comparison. From top to bottom:

The job of headers is the evacuate the exhaust gases quickly and efficiently. Think of the engine as a parking lot with 4 exits. The header is the road that leads from each exit which then merges into one road some distance away. The goal is to have the cars come out the fastest in an orderly even manner. Yes this is a drastic over simplification but that’s what headers do in essence.

Well it’s stock, what can we say? Quite a lot actually. Going by our road analogy, we want the roads to be all the same length so that each car travels the same distance. And the stock headers are obviously not the same length, with the two outer runners being a lot longer than the middle two ones. 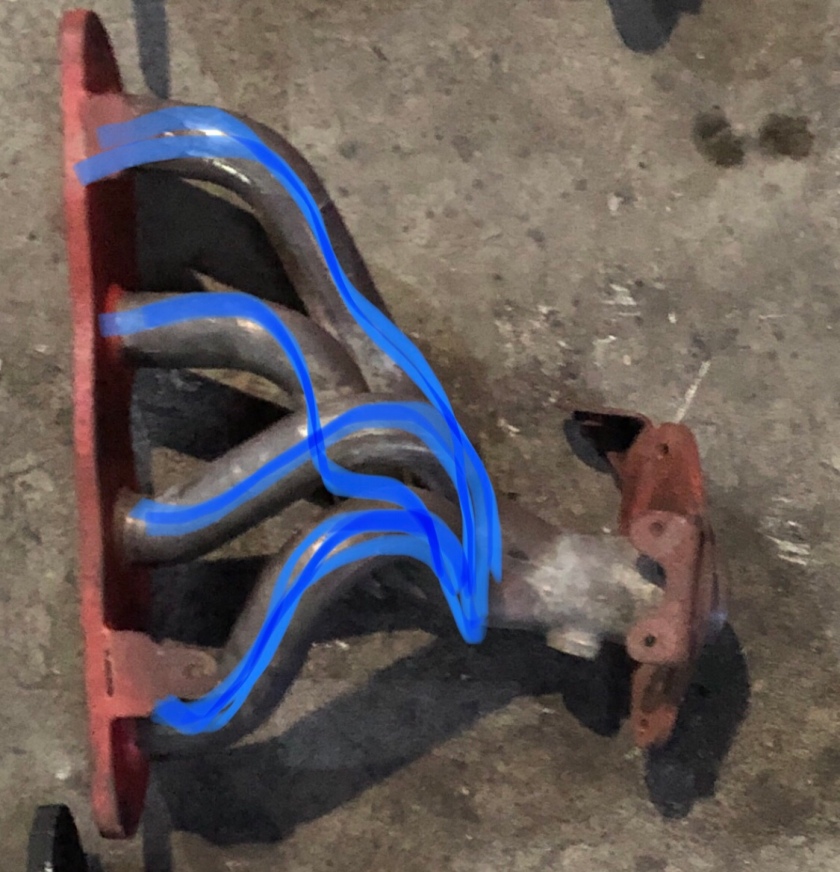 The TRD header corrects the unequal length of the stock headers by lengthening the middle two runners, making all 4 pretty much the same length, which improves flow as well as makes the spacing of the exhaust pulses more even.

The biggest short coming, is quite literally that it’s short, because the flange connects to midpipe which houses the catalytic converter, and this is the only flange, with the next one being after the rear wheels. So in order for this to be a bolt on with no welding needed, it had to be the same length as the stock header.

Going back to our parking lot analogy, it doesn’t take 5th grader to see that the cars will come out faster and merge more efficiently if the roads leading out are longer and are kept separate longer. So why not do this to begin with?

Well this isn’t a bolt on as the catalytic has to be cut off from the midpipe and the flange moved further down. It’s by no means a hard job to do but it’s not a bolt on, and there will always be people who are wary of stuff getting cut up.

The only way to preserve the stock items is to have a whole new midpipe made, which adds to the cost.

But if you’re going to get a whole exhaust system done, then this is definitely the best way to go.

So how good? It’s another 11hp more than the short TRD header, for a total of 119whp. This power level should put us at par with the Civics running the B20s in terms of power. 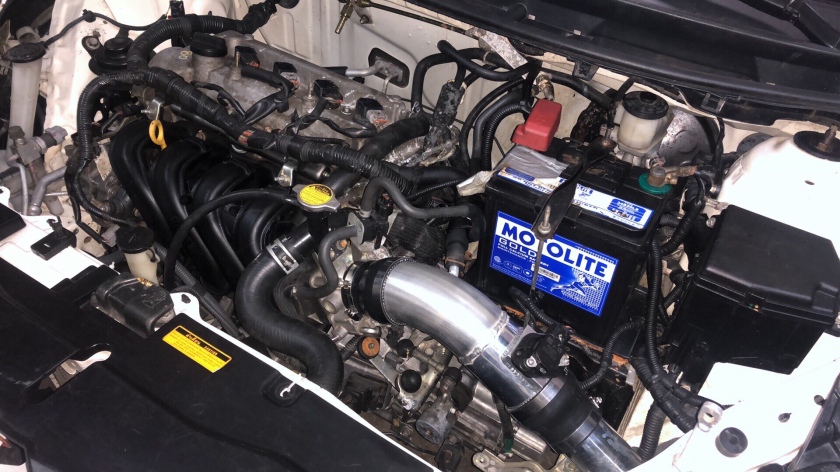 We also made the the intake tube bigger at 3″ to get more air flow into the engine.

Time for a disclaimer. You can’t install these parts without having the engine tuned, whether with an ECU remap or Unichip. A bigger intake a freer flowing exhaust will cause the engine to lean out and without the proper fuel correction, will actually make your car lose power.

So it’s best to do these things all the same time, unless you’re ok with having 10hp less than stock until you get tuned.