“What does it do?” This has got to be the #1 question I encounter during car shows whenever people ask about the Unichip. Next up is “How does it work?” Which will be the focus of this article to explain in as simple terms as possible the how and why.

First of let’s start with the name, Unichip. The Uni part stands for Universal, and it is THE ONLY true universal module that works on any car, any brand, gas or diesel. It’s the same Unichip for your car, truck, minivan, roadster, gasoline or diesel powered, 4 cylinder, V6 or rotary. No other chip can make that claim. Which is the best feature of the Unichip. When it comes time to sell your vehicle, simply unplug it and we can transfer it to whatever next vehicle you buy. It’s really an investment that grows with you.

The Chip comes from well, a computer chip. And this is where the confusion sort of sets in. When most people hear the word chip, they automatically think of something like this:

But in reality, the Unichip circuit board is a lot more complex and contains a multitude of chips and processors, making it more similar to a computer’s mother board than single chip, like the one below:

So how does it make power?

All gasoline engines all over the world need 3 things to make power: Air, fuel and spark. Let’s take a typical 2.0L engine. The 2.0L denotes the displacement of the engine, which is the amount of air the engine sucks in every combustion cycle. Unless more air is introduced using a turbo or supercharger, there is nothing that can be done to lessen this amount.

Next is the amount of fuel. This, the Unichip can control. Think back to your high school chemistry class and the term stoichiometric ratio. Simply put, this is the ideal mixture of 14 parts air to 1 part fuel of (14:1) that theoretically ensures complete combustion with all of the fuel being burned away to produce the maximum amount of power.

But of course in the real world, this can never be, so almost all cars tend to run a richer mixture, with more fuel being injected than needed which results in a mixture of 12:1 or even 11:1 on some engines. Why is this? First off, a richer running engine is more forgiving and reliable for human error, mainly the lack of mind and maintenance by most non enthusiasts, who just put fuel and just drive.

So most of the tuning that we do with the Unichip is to actually reduce the amount of the fuel the engine gets. By doing so, the remaining fuel gets more burned completely, giving you more bang inside the engine and since we are taking away fuel, you get better mileage as a result.

The next component that enables combustion is spark. This is what most people tend to think of when the word spark is mentioned:

And they won’t be wrong. But there is a lot more to spark than just the sparkplug. When the spark actually fires in combustion process is also just as important. In almost all diagrams of the 4 stroke engine such as the one below:

Depicts the sparkplug firing when the piston is at the very top (2). In reality, the sparkplug fires way before the piston ever gets to the top. This is done because the air fuel mixture needs time to burn and combust, although it may seem like instantaneous to our eyes. The earlier you can fire the sparkplug in the combustion cycle, the more time the mixture has to burn completely which results in more power. Old school guys will remember this as advancing the distributor timing.

With modern distributorless engines, when the sparkplug fires is controlled by the ECU, which can be controlled by the Unichip. And unlike the old style distributor, which gives a blanket adjustment for the whole rpm range, Unichip can vary the amount of timing for every rpm, say 3 degrees more from 1500-3500 rpm, 2 degrees from 3700-5500rpm, and 1.5 degree from 5600 up to redline.

These two adjustments cover 80% off all engines in existence. So by changing the amount of fuel and when the sparkplug fires, this is how Unichip is able to make more power, more torque and get better fuel economy for your vehicle, and why it’s the best engine programming solution out there.

Reflash is the now prominent term when it comes to tuning, a purely software based solution that doesn’t involve any additional hardware, plugging of devices or wiring in of anything.

How it normally works is that software is used to Read the Ecu contents when the laptop is plugged into the car’s on-board-diagnostic (OBD) port, and then after the changes have been made, Write the contents back.

This method works on almost all cars, except for Toyota, whose ECU only allows a Write, but not Read. That’s where the conundrum lies. How can you edit something when you can’t get to it?

Well turns out we have to buy the base file from the reflash software provider, and they in turn have their ways of getting that base file from dealerships all over the world.

The file were talking about is the Software calibration file below:

Toyota actually doesn’t make the ECU, Denso does and they do it in batches, and each batch will have a different calibration file even if they’re going into the same car model. For example, the Fortuner 3.0L has over 50 different calibration files even though they all go into essentially the same car. And if we open it up, the contents are also the same. Why is it like that? Dunno.

Since most reflash software is made in Europe, it makes sense that the European spec vehicles are the first ones that get made and have the files available. Then it trickles down to the rest of the world.

And if your car came with a locally manufactured ECU, like the ones on our Vios below: 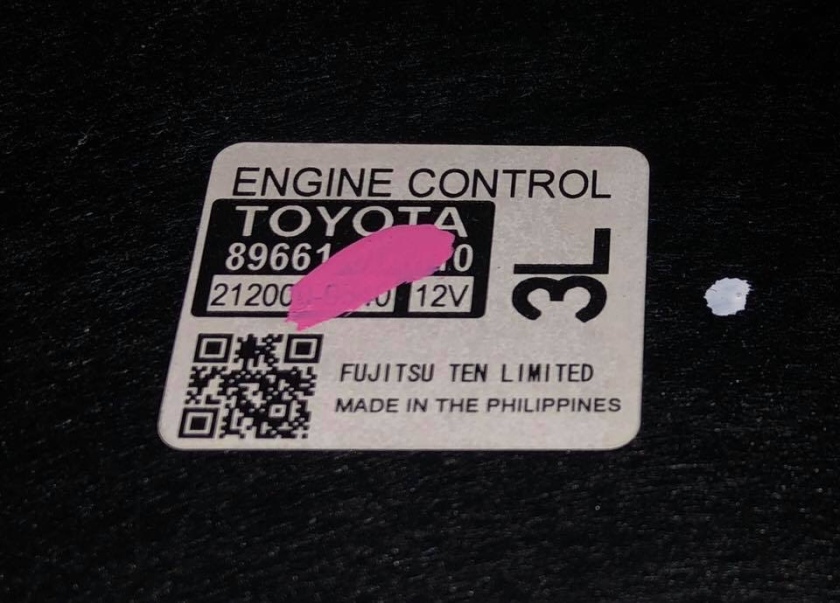 Only way to get a base calibration file is if you have contacts pretty high up inside the dealership.

Eventually like everything electronic, it will get hacked and cracked, just like people are now able to run Family Computer games on an old iPhone3. It’s just a matter of time. And that’s also another conundrum. The whole point of ECU reflash is that it doesn’t void the warranty period, but by the time the calibration file does become available, warranty period is over and you now have a other choices such as Unichip Computer or if you’re rich, full blown stand alone ECU.

So does anyone know anyone in the casa?