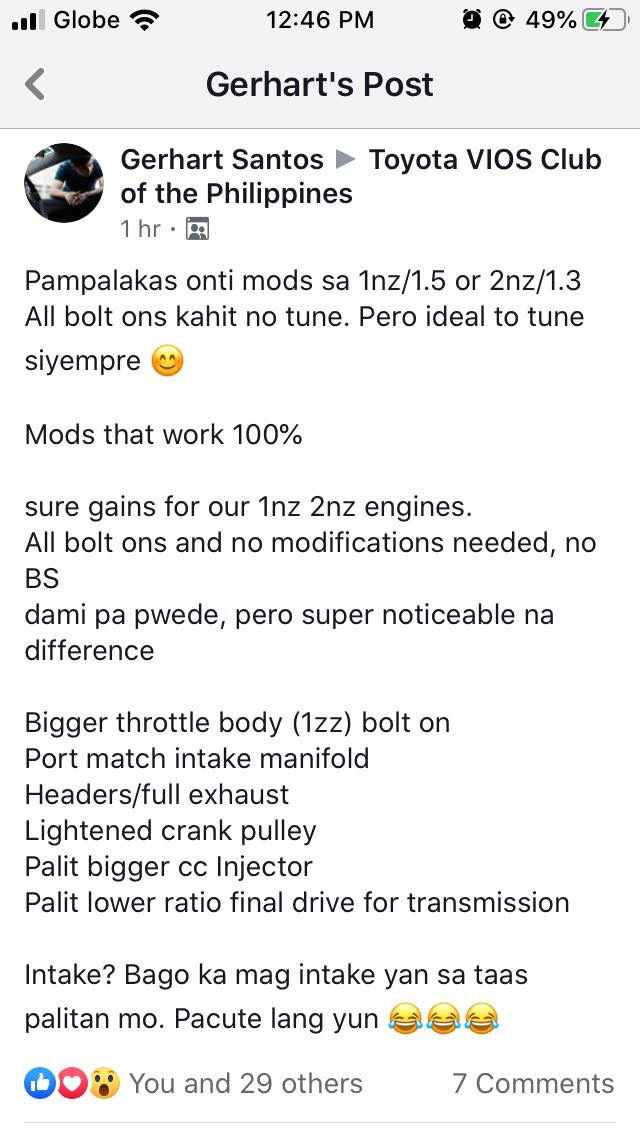 I get screenshots like this every so often from people wanting a second opinion on what to do with their cars, and a lot of these are dumb stupid ideas, like this guy.

Read his “recommendations” and let it sink in, as I explain the absurdity of what he’s peddling.

It’s actually pretty smart, starting off with a disclaimer, that it’s ideal to get a tune, which gives him blanket coverage for when people realize on why it doesn’t work.

All bolt ons and no modifications needed. Dude a bolt on is already a modification. He doesn’t know the difference between the two.

He goes on to say that more can be done. Well duh of course, sky’s the limit as long as you have money. And yes you will notice a difference. More on that later.

A bigger throttle body from a Corolla Altis. Bigger throttle bodies have been a performance staple ever since the days of carb engines but this is DEFINITELY NOT a bolt on, as shown by his second line, Port Matched Intake Manifold.

The Vios manifold is PLASTIC, in order for make the hole bigger, you need to grind away the plastic and relocate the mounting holes for the throttle body, how the hell is this a bolt on??? Bolt on means that the part is installed and taken off with just screws and bolts, no damaging or alteration of the original parts. FAIL

Headers and full exhaust. I’ve covered this extensively in my other post about the different header types, short and long tube, and unless he has access to a Dyno to prove that whatever he does makes power and not lose it, well you just have to take his work for it, promise.

Lightened crank pulley. Yes this works, yes this adds power, he never did state how much. I’ll tell you 2-3hp at most.

Change to bigger injectors. This is monumentally stupid. The stock injectors of the Vios are more than enough to make the air fuel ratio rich as hell, up to the 11:1 range. And you never want that kind of AF in a non turbo engine. The only difference you’ll feel with this is the frequent trips to the gas station because sobrang lakas sa gas.

Lower final drive. This doesn’t add any power but does add response. The question is, at what price? To install a final drive, the whole transmission needs to be taken apart, plus you will screw up your odometer reading, and for manual cars, more shifting as the car can coast less which results in once again Mas Malakas sa gas kasi laging sumisibat sa konting tapak. There’s a very good reason why final drive changes are only done for racing cars and not street cars.

For an in-depth explanation of pros and cons of changing the final drive, here’s Engineering Explained

And it’s always a compromise on what you have currently depending if you get a lower or higher final drive: more sibat means lower speed per gear and top speed and and crappier mileage. Better economy equals crappier acceleration in every gear, but higher top speed.

And have you guys seen the prices on a set of final drive gear and shaft?

Baka Ma-heart attack kayo at $540, that still doesn’t included the labor or the brains to have one installed.

For a dude that “offers” transmission rebuild services, he doesn’t know how to make an intake. Hmmmmm I smell bullshit and horseshit. So K&N must have been scamming people for almost half a century because they sell nothing but filters and intakes.

Then again, he did say tuning is always ideal 🤦‍♂️ That’s his get out of jail free card for any problems that will happen.

And all you have is his word that works, no pictures, no actual car, and more importantly NO DYNO chart.

So if this guy wants to prove me wrong, by all means bring it and I’ll Dyno it for free, and let the whole Vios and car community know you are a class A Bullshitter